The Worst Christmas Present Ever, Revealed: It's a tanuki!

A couple of months back, I wrote this post notifying my brother Jim that I had found a 2011 Christmas present even worse than the fluorescent pink man-leggings I gave him in 2010. We are still on speaking terms only because Jim is a very good sport.

Well, here it is, the most horrible thing I could find in Japan: a tanuki statue. What is a tanuki?

"Among the most recognizable and ribald images in Japanese folk art is a rotund, jolly little bear-like animal, wearing a large straw hat and carrying a bottle of sake, and most unabashedly propped on top of his own enormous, dragging scrotum. This is the famous and beloved tanuki."

Tanukis do not have to be horrible. In fact, if you can get over the giant scrotum thing, many of them are kind of cute. Here's a little fellow Justin and I photographed in Kyoto, where tanukis are so popular you see them in practically every doorway: 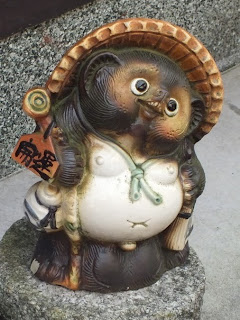 This tanuki is odd but sort of adorable, like the Hello Kitty version of the cast of Splash Mountain. He would not look out of place on a child's bookshelf, provided you lied and told the child that he was sitting on a strangely-shaped tree stump. The tanuki I bought Jim is not cute and should not be placed anywhere near a child. The mere fact that this statue exists has Walt Disney rolling in his grave. 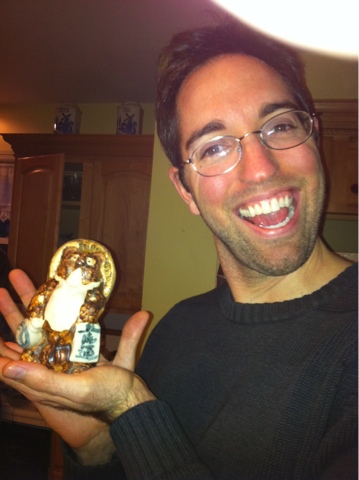 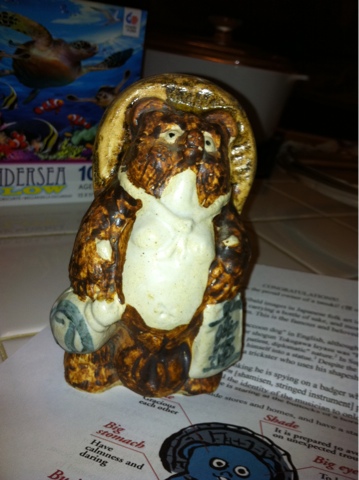 Jim's tanuki is cute-tanuki's derelict Appalachian moonshiner third cousin. Cute-tanuki bats his eyelashes at you; Jim's tanuki gives you a terrifying thousand-yard stare. The paint on his arms blurs into his body and his body bleeds into his alcohol bottle. Methamphetamines may have been involved.

What is tanuki sitting on? (Besides the scrotum). A research paper, of course. By yours truly, two pages single-spaced, with fifteen footnotes. I'm not sure my university envisioned me researching raccoon-dog testicles as part of my free alumni JSTOR subscription, but maybe that was a risk they were willing to take. 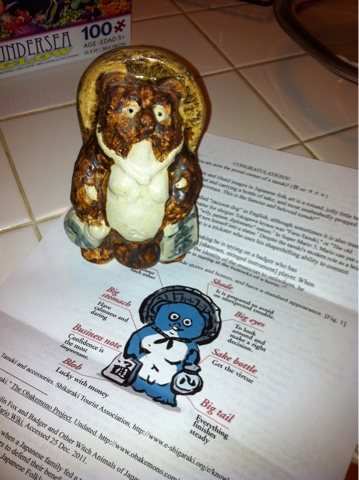 What's that you say? You want to read this paper? OF COURSE YOU DO, and here it is.

Disclaimer: This is probably the most off-color thing I have ever posted on one of our blogs. It only passes what Justin and I think of as the "grandma test" for blog appropriateness because Justin has exceptionally funny grandmothers. It is likely that at some point in my life I will regret having posted this. For now I will use the Muppet Christmas Carol defense: Rizzo asks Gonzo, "Say, this is pretty scary stuff. Should we be worried about the kids in the audience?" Gonzo says, "Nah, this is culture." And so are tanukis!


The tanuki is generally called "raccoon dog" in English, although sometimes it is also translated as "badger." An "irreverant" nickname for shogun Tokugawa Ieyasu was "Furu-Tanuki," or "The old raccoon-dog," because of the shogun's "wily, patient, diplomatic" nature.1 In Super Mario 3, Mario can put on a "tanooki suit," whereupon he can fly and turn himself into a statue.2 Despite the tanuki's modern role as a bringer of luck,3 the tanuki of Japanese folklore is a trickster who uses his shapeshifting ability to commit mischief:4
"[A] man is duped into thinking he is spying on a badger who has transformed into a samisen [shamisen, stringed instrument] player. When the man is about to reveal the identity of the musician to onlookers, he suddenly discovers that he is staring at the buttocks of a horse."5
Tanuki statues are often set outside stores and homes, and have a standard appearance. [Fig. 1]

(Fig. 1: Tanuki and accessories. Shikaraki Tourist Association)
It must be acknowledged that this diagram glosses over some of the less reputable aspects of the tanuki. For instance, the document identified as "business note" is actually the tanuki's liquor bill,6 which "he never pays."7 The aspect of tanuki's physical form labeled "blob" on the diagram is more commonly known by its medical term, "scrotum."8
Just as the scrotum is a disproportionately large part of the tanuki's physical form, so does it dominate tanuki mythology. As illustrated in 19th-century Ukiyo-e prints by the artist Kuniyoshi, tanukis can use their testicles as fishing nets, umbrellas, tents, free weights, and boats.9


The testicles can even be used "as something like a bulky carpet under which to smother his enemy."10 In folklore, the tanuki's shapeshifting testicles are an important element in his repertoire of deception. In a story known as "The Tanuki's Trick," a lost mapmaker takes shelter in a mountain hut, and passes the time by "pull[ing] some loose threads from the mat and finally stab[bing] the mat with a knife." At this point, the hut disappears, and "the man discovers that he has been hosted by a [tanuki] who created an illusion of the house, using its scrotum to fashion the eight-mat floor."11

Those concerned for the tanuki who has just been shanked in the nuts must recall that the tanuki's testicles are unusually durable. He has toughened them via such methods as using them as hammers12 and playing them like a drum, hitting his testicles with a pair of sticks.13

Tanuki's scrotum is also immortalized in a Japanese children's rhyme:


Why, then, does this large-scrotumed creature signify luck? Alice Gordenker, of The Japan Times, quotes an explanation from scholar Shigeo Okuwa:

"To make gold leaf... craftsmen would wrap gold in a tanuki [scrotum] skin before carefully hammering the gold ...It was said that gold is so malleable, and tanuki skin so strong, that even a small piece could be thinned to the size of eight tatami mats. And because the Japanese for "small ball of gold" (kin no tama) is very close to the slang term for testicles (kintama), the eight-mat brag got stuck on the tanuki's bag. Soon, images of a tanuki began to be sold as prosperity charms, purported to stretch one's money and bring good fortune."15
1U.A. Casal, "The Goblin Fox and Badger and Other Witch Animals of Japan." Folklore Studies, Vol. 18, 1959, 50
2"Tanooki suit." Super Mario Wiki. Accessed 25 Dec. 2011.
3Casal 58
4The tanuki can be helpful, as when a Japanese family fed a tanuki family in a time of famine, and the tanukis reciprocated by transforming into wrestlers to defend their benefactors from burglars Casal 54.
5Violet H. Harada, "The Badger in Japanese Folklore," Asian Folklore Studies , Vol. 35, No. 1, 1976, p. 4.
6Barbra Teri Okada, "Netsuke: The Small Sculptures of Japan." The Metropolitan Museum of Art Bulletin, New Series, Vol. 38, No.2, Autumn, 1980 p. 24.
7The tanuki in fact does pay his bills, but in illusory coinage which disappears not long after the tanuki does. The bill has ironically developed into a modern symbol of trust. Schumacher, Mark. "Tanuki in Japanese artwork." Onmarkproductions.com. 1995-2011. http://www.onmarkproductions.com/html/tanuki.shtml. Accessed 26 Dec. 2011.
8Tanukis rarely have penises. The scholar U.A. Casal has "never obtained a sensible explanation of this defect." This author feels that Casal's pursuit of a "sensible explanation" in any aspect of tanuki mythology is optimistic. Casal 56.
9Pink Tentacle (Blogger). "All-purpose tanuki testicles (prints by Kuniyoshi)." 23 June 2009. http://pinktentacle.com/2009/06/all-purpose-tanuki-testicles-prints-by-kuniyoshi/. Accessed 25 Dec. 2011.
10Casal 56.
11Harada 5.
12Pink Tentacle
13Casal 56.
14 The rhyme is sung to the Protestant hymn "Now We Gather at the River." Joel M. Maring and Lillian E. Maring, "Japanese Erotic Folksong: From Shunka to Karaoke." Asian Music, Vol. 28, No. 2 (Spring - Summer, 1997), p. 36.
15Alice Gordenker, "Tanuki genitals." The Japan Times. 15 July 2008. http://www.japantimes.co.jp/text/ek20080715wh.html. Accessed 26 December 2011.
Posted by Nana at 7:28 PM